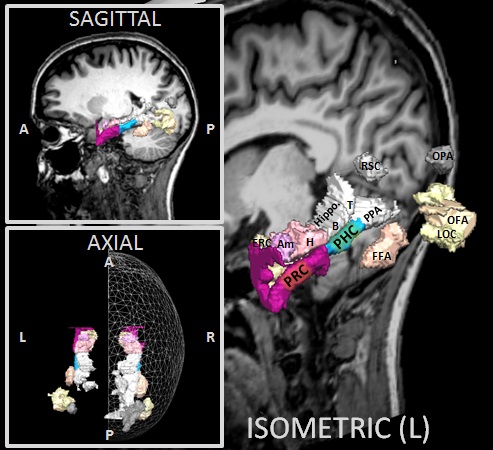 This is a collection of 40 sets of medial temporal lobe anatomical and 70 sets of ventral visual stream functional region of interest (ROI) definitions, collected over the course of running various fMRI image memorability experiments and pilot studies.

The MTL ROIs were all anatomically defined by hand, using a Wacom tablet and BrainVoyager's annotation functions. They include bilateral perirhinal cortex, entorhinal cortex, amygdala, hippocampus head, hippocampus body, hippocampus tail, whole hippocampus, and parahippocampal cortex definitions (16 total ROIs) for each of 40 participants.The VVS ROIs were defined based on independent functional localizers, and include the FFA, OFA, PPA, RSC, OPA, LOC, and early visual cortex for 70 participants (when identifiable). Further information on these ROIs can be found in the specific downloads. As one potential usage, these could be used to make probabilistic maps to quickly and loosely define these regions for other participants.

ROIs are available as .VOI BrainVoyager files, .txt files listing the coordinates within the ROIs (following the straightforward BV .VOI format), as MNI space MATLAB structures, and as MNI space NIfTI files. The various file conversions are still "beta" so please let me know if there are any issues.

January 30, 2020 Updated the site to reflect my new position as an Assistant Professor at the University of Chicago.

July 3, 2019 Updated publications. Also starting to recruit for my new lab to start at University of Chicago in January!!

May 16, 2017 Added example psychophysical scripts for free use

September 9, 2016 Updated my site to reflect my institute change!

October 6, 2014 Updated publications, CV, and bio. Got some poster awards!

April 18, 2014 Updated publications and added a program for easily making image sets from the Face Database

January 14, 2014 Updated publications and the 10k US Adults Face database! Get it while it's fresh!

March 31, 2011 Updated bio and publications list (decided on a grad school and got three more papers in!)

May 24, 2010 All graduated! Updated profile and CV information

November 9, 2009 Uploaded the Japanese version of this site, and made minor edits.

November 4, 2009 Little tweaks made to the site. The Japanese version will be uploaded in the next couple of days!